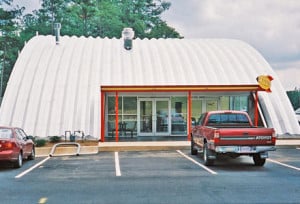 Alternative housing is much more than a talking point. For centuries there have been people devoted to finding and developing cheap sustainable shelter while maintaining quality and style. Many people have found that a viable alternative building that converts to a nice home is the Quonset hut. I am sure you have seen them, if not in person at least in old war movies or war movies set during World War II.

The George A. Fuller Company started off the history of the Quonset hut in 1941. The Quonset hut really was not developed as a housing alternative. They were developed for the U.S. Navy during World War II. The Navy needed housing and facilities for sailors on shore and they needed the buildings to be somewhat portable. The name Quonset hut came from the location they were initially manufactured; Davisville Naval Construction Battalion Center at Quonset Point, Rhode Island, USA.
The design of the Quonset hut relied heavily on its British predecessor from World War I; the Nissen hut. The first Quonset huts were 16 ft. X 36 ft. and covered with corrugated steel. The interior was insulated and paneled with wood. They had wood tongue and groove flooring and plywood ends where the doors and windows were fitted. Quickly the Quonset huts were used for more than one purpose, and some required a special layout to accommodate showers, latrines, dental offices, bakeries and isolation wards, as well as all the equipment necessary for those additional uses.
The all-steel configuration worked well in the European Theater, but when they were deployed to the Pacific Theater the steel rusted quickly. A revisit to the drawing board produced an all-wood hut that was quickly dubbed the “Pacific Hut.”

The “Pacific Hut” retained much of the original Quonset hut configurations. The exterior was made of spruce, a hard tree abundant in the Atlantic region of the United States. Their usage of trees offered some “camouflage effect” in the Pacific jungles when soldiers and staff are stationed on the islands before and after operations.

After World War II ended the Quonset huts were sent back to the United States. Many were sold to the public. Many were used as barns and farm buildings, but some were converted to houses. Some people have turned huts into shops, restaurants, event centers and chapels.

The modern innovation of turning empty container vans into houses and shops pay their respects to this recycling practice of the past. And with the creativity of the human mind, people were building their own Quonset huts with other materials.