There are a lot of factors that contributed to the US/Allied victory over the Axis powers in World War II. Ask a historian about a contributing factor and you will get an answer that might vary from another opinion given by another historian. Considering how big and complicated World War II was, this diversity of opinion regarding contributory causes to US victory, particularly in the Pacific theater, is very understandable. The most common reasons given are the US’ massive industrial base, great mobilization, the failure of the Japanese to knock out American oil lines both during and after Peral Harbor, and many other factors. One key factor that should be included on that long list of contributing causes should be the humble Quonset Hut. That’s right-that domed-shaped utilitarian building helped the US win the massive campaign against Imperial Japan in the Pacific Theatre. 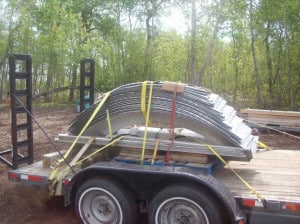 The biggest problem America faced when fighting Japan in the South Pacific was the massive amount of space the Navy had to cover. This was not going to a traditional land war. America’s world war 2 experience in the Pacific Theater was an island hopping frustrating game of cat and mouse. There was a lot riding on American troops’ ability to land on one island to cut off a Japanese supply line while being versatile enough to send troops to other islands to launch an offensive. Traditional housing options aren’t as mobile. There was a shortage of skilled carpenters who can painstakingly assemble housing from raw materials on the job site. The navy needed a housing design that was very portable, pre-fabricated and can be moved quickly from one location to another without much hassle. Above all, the design had to be very light and must be able to able assembled by people with little to no carpentry skills. The Quonset hut answered all the Navy’s requirements.

Quonset simplicity translates to wartime mobility
The US Navy needed to zip troops from one corner of the vast Pacific front to the other. The Quonset hut, designed for quick assembly and disassembly by non-skilled personnel fit the bill. Since these buildings were very lightweight, they were quickly sent to many parts of the front. All told, World War 2 saw the total production of Quonset huts range from 150,000 to 170,000. Thanks to its humble design, the Quonset kept American troops warm during the long Pacific War against Japan and provided cheap, ready, and easy buildings for many key military operations from food to supplies to storage to medical assistance. The role of the Quonset in World War 2 should not be underestimated. It is said that an army travels on its stomach. Well, the Quonset shows that an army’s fighting mobility is bolstered by its housing mobility.